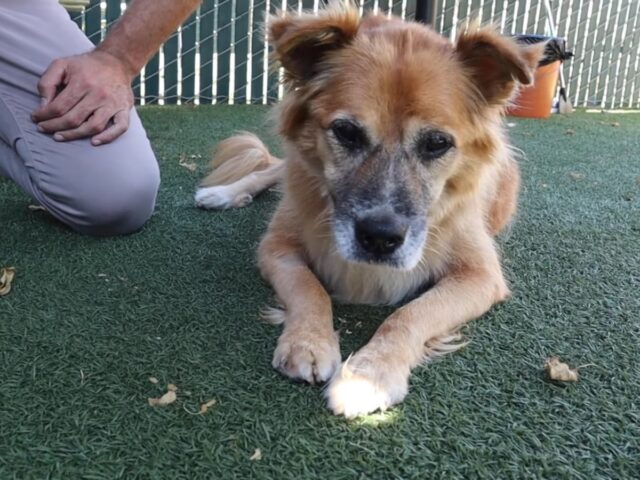 KC was surrendered by his family at the Sacramento Society for the Prevention of Cruelty to Animals (SPCA). Lee Asher heard the 14-year-old senior dog’s story, so he decided to go to the shelter and foster her.

Lee approached KC’s kennel, and the poor girl looked so scared and confused. Lee’s friend at the shelter, Marnie, shared that KC ended up at the pound because her previous family had to move away.

14-Year-Old Dog Is SO Excited To Leave The Shelter

Marnie said that KC spent the entire fourteen years with her previous family, but they had to move away. Marnie shared that Marnie’s owners probably could not afford the pet deposit or take KC with them, which was why they surrendered her instead of leaving her on the streets.

Lee was shocked that KC was left at the shelter, but he said he would do everything he could to make KC happy. Lee shared that he will give KC all the belly rubs and massages she needs and feet her the best food he could give her.

Lee was supposed to leave the kennels when he came across a little pup wearing a cone of shame named Pearlie. Marnie informed Lee that Pearlie had dental surgery and preferred women over men.

Lee’s girlfriend, Sydney, wanted to foster the two dogs, but the shelter had a rule that each person could only take care of one pup. Lee and Sydney eventually decided that he would foster KC under his name while Sydney would be taking care of Pearlie.

The shelter staff agreed, and Lee and Sydney were able to bring KC and Pearlie home for foster care. Pearlie immediately bowed, rolled over on her back and showed her the belly as soon as she got out of her kennel.

Lee drove to his home with his new foster dogs. Lee introduced KC and Pearlie to all his pups, and they got along almost immediately without any problems.