Home Dog Stories A Dog Lover Takes In 300 Stray Dogs To Protect Them From...

Hundreds of precious lives were on the line when a horrific hurricane hit the Yucatan Peninsula. Numerous stray animals explored the city in the quest for aid, as they were unable to protect themselves from the developing calamity. Fortunately, a brave guy opened his home to help the needy strays.

Ricardo Pimental is a huge animal lover who devoted his life to animal rescue. He started the Tierra de Animales (translated to ‘Land of Animals’), an animal rescue and rehabilitation center, in 2011. Ricardo had high ideas for it, even though it was a modest rescue shelter.

Ricardo’s biggest concern since hearing about hurricane Delta has been about all of the dogs that he had at his shelter. He was apprehensive about how he would help them all, so he devised a variety of strategies.

His issues did just end with the shelter. He was well aware that he would have to feed the dogs during the disaster. Thankfully, gifts flooded in from all across the city from fellow animal lovers.

The next stage was working out how Ricardo would handle all of the stray dogs under his care now that the food issue had been resolved. Then he had the most insane idea: he would open his own home for all of the shelter dogs.

Ricardo and his family worked hard in the hours leading up to the hurricane, leashing the dogs one by one and bringing them into their home. It was a difficult task, but the dogs all adored Ricardo and trusted him implicitly.

Ricardo also took in a flock of sheep, dozens of cats, baby chicks, and bunnies, in addition to the 300 dogs. Despite the chaos, Ricardo was relieved knowing that all of the animals were safe.

Ricardo’s bravery piqued the curiosity of animal lovers all across the world. They praised his bravery and selflessness in assisting the helpless creatures. As a result, his shelter was able to generate a significant amount of money to aid even more shelter animals. 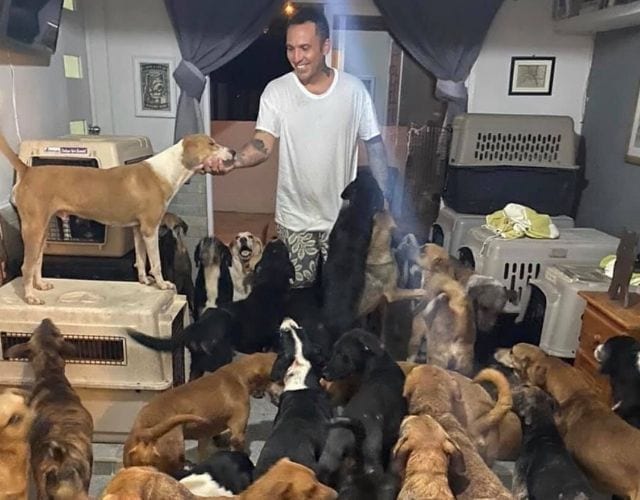