Home Dog Videos Dad Helps His Blind Dog Regain Her Confidence By Going On A... 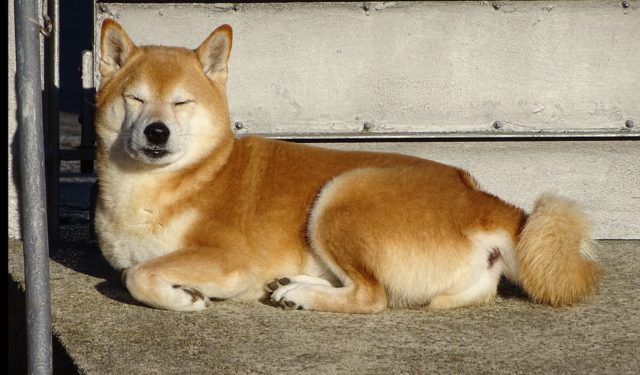 Katana is an 8-year-old Shiba Inu who lives with her dad, Kyle Rohrig. She’s a confident and experienced hiker until she lost her vision. Thankfully, she has a dad who would do everything to ensure that his fur baby would get her confidence back up.

Kyle and Katana are adventure buddies. They’ve once finished the 2,200-mile Appalachian Trail and were on their way to completing the 2,650-mile Pacific Crest Trail. Unfortunately, in the middle of the hike, glaucoma started to cloud Katana’s left eye.

Because of Katana’s condition, the two of them were forced to take a break from the wilderness. Katana underwent surgery. Then, after the vet gave her clearance, the two of them returned to finish the trail.

Sadly, after over a year, Katana lost her right eye vision. This put a toll on the ever-confident pup’s personality. Kyle said that Katana became timid and very cautious, as if she was unsure about herself.

Nothing, and I mean NOTHING interrupts @adventures.of.catfox when she's taking a pack nap. The coolest cucumber you'll ever meet. . . .

Certainly, Katana would be able to memorize their house’s layout and live the rest of her life in comfort. However, Kyle knew that their adventures weren’t over yet. So, as Katana was getting used to the dark, Kyle started building a plan that would help bring her confidence in her abilities back.

Kyle said that he has been eyeing the Florida Trail for years. However, he never made the plan official. When Katana lost her vision, he thought that this trail would be perfect for helping Katana ultimately come to terms with her new condition.

On January 8, the duo began hiking at the Big Cypress trailhead in Everglades. This was a 3-month hike with a trail that’s mostly flat. However, it was buggy, wet, and muddy. Sometimes, the water would even reach Kyle’s waist. Other than that, they also braved through wild animals like snakes and alligators. According to Kyle, it was a monotonous and grueling trail.

Whenever the conditions of the trail get too tough for Katana, Kyle would carry her over his shoulders. Katana hiked over 200 miles on her own in total, and Kyle carried her for the remaining 800 miles. During the entire time, Kyle saw how Katana loved having the freedom to explore things.

Towards the end of their escapade, Kyle could tell how much Katana has improved. According to him, now, Katana isn’t only dealing with her new condition but thriving.