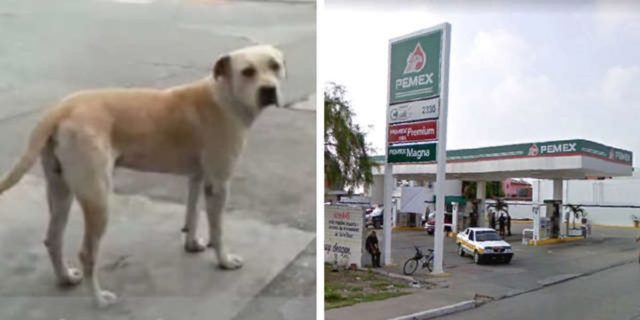 Approximately two years ago, a skeletal, agitated and terror-stricken dog began to frequently visit a gas station near Tamaulipas, Mexico. As days went by, the employees there have also noticed the poor dog. Clearly, the dog has experienced abused and maltreatment.

It took a few weeks before the employees of the said gas station have begun to get the faith and confidence of the dog. But still, they did not fail to feed and bathe the dog. They even had him checked by a vet.

The employees already developed a liking for the dog. Being naturally kind-hearted, the gas station’s owner, Gerardo Aguilar, decided to take the dog into their custody. All of them treat the dog as if he is family.

The dog was also given a name by his humans. He is now called Randy. He is already deviating from his old self, the one who is fearful and weak.

Never did the people from the gas station realize that Randy can pay them back for the good behavior they have showered him. And that was until one day when an unexpected circumstance got in their way. Randy has saved all of them from a terrible danger.

One night, two men who were both armed with a deadly weapon came to the gas station. They went straight to the cashier and pressured the employee to give them all the cash that is on the vault. The employee, of course, tried to protect the money they have earned, so he was beaten up by the armed men.

Randy who was just sleeping nearby heard the chaos and hurriedly went to the cashier’s office. He quickly attacked the men and made sure they leave right away. Luckily, the employee just got minor wounds and was immediately treated in a nearby medical facility.

The gas station’s owner could not be thankful enough that Randy was there. More than the revenue that they could have lost, they might have also lost the lives of their valuable employees.