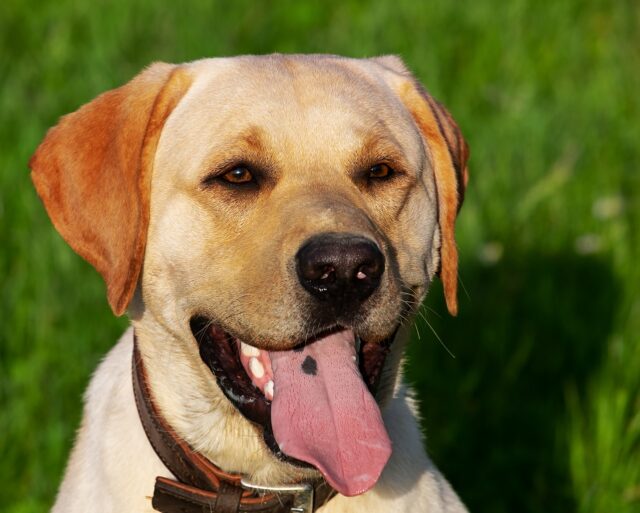 It was a typical workday for Takis, founder of Takis Shelter, an organization that helps rescue and rehome dogs, when he received a phone call. A woman called Takis to report a sick stray dog hiding inside a shed.

Once Takis was off the phone, he dropped everything he was doing and immediately drove to the dog’s location. It didn’t take long before Takis arrived at what looked like an abandoned shed.

Takis saw the dog inside the shed lying on some wood. He gently approached Luna, the Labrador, and slowly petted her head to gain her trust.

Luna’s tail began to wag, and that was when Takis knew that the dog trusted him. Takis then tried to lure the dog outside with some food but unfortunately failed.

The dog didn’t want to move from her spot, so Takis ended up carrying her to his car. Once Luna was successfully on the passenger seat, she cuddled into the soft leather, glad to be on something soft.

Takis took Luna to a vet clinic to be examined. Fortunately, the veterinarian saw no illness on the dog but found that she was malnourished. Takis gave Luna some food and water before he brought her back to the shelter.

Once Takis and Luna arrived at the shelter, dozens of dogs approached them. Luna was shy at first, but she was learning how to play with the other dogs.

It took about two weeks before Takis noticed Luna’s progress. Luna had gained weight and was more confident than before.

Luna truly blossomed into a more playful and affectionate dog thanks to the other dogs in the shelter. Takis soon decided that Luna was ready to be adopted.

After a few days, an animal shelter in Germany contacted Takis. They wanted to foster Luna and already had people that wanted to adopt her. Takis was glad that Luna would soon have her forever home.