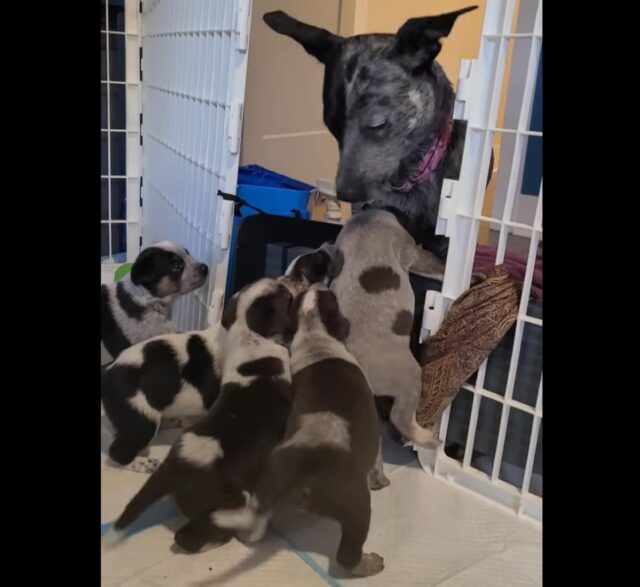 Jade admitted that she has never fostered a pregnant dog before. However, Jade did not hesitate to give Bailey what she needs because she needed it now more than ever.

Jade recalled that Bailey never left her crate during her first couple of days at her foster home. Bailey always stayed in the corner and often hid behind any object that was bigger than her.

Jade wanted Bailey to get used to her, so she showered her with treats and belly rubs. Bailey eventually came out of her shell when she realized that she would get rewarded with yummy snacks and cuddles.

Bailey loves belly scratches that she would do an army crawl on the carpet to get free belly rubs. Jade shared that there are times when Bailey’s big preggy tummy often gets stuck under the couch because of how obsessed she is with crawling on the rug.

Jade noticed that Bailey was getting close to giving birth because she immediately went to her little birthing pen and stayed there the entire afternoon. Bailey birthed to nine puppies, and Jade could not be proud of how strong Bailey is.

Jade shared that the nine puppies were generally healthy except for Hoosier and Moye. Hoosier was born with swimmer syndrome, while Moye was a lot smaller than the other pups and had breathing difficulties.

Jade admitted that she was unsure if Hoosier and Moye would survive the night, but they both luckily did. Hoosier and Moye moved past the critical stage, thanks to the 24/7 special care and therapy they did for the two pups.

Bailey transformed into a happier, confident ball of fur as soon as her puppies grew bigger. The pups helped Bailey act like a puppy, and they were all eventually adopted after fostering them for eight weeks.