Home Dog Stories The Cutest Friendship Ever! A Senior Dog Bonds With A Little Girl... 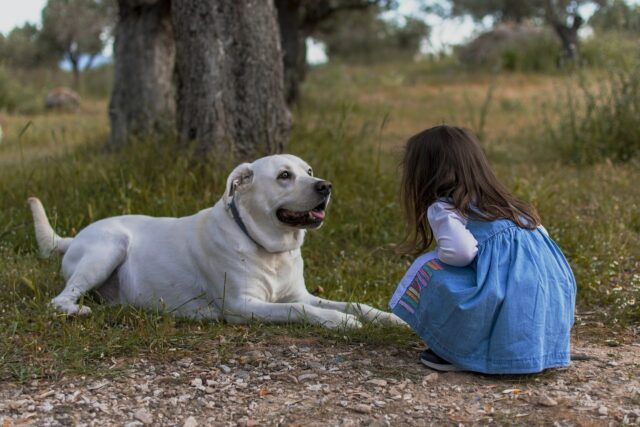 Sheitan, a 12-year-old dog, used to spend her time alone.  She had a rough past – her former owners used to tie and leave her outside the house. But after a woman named Bridget Hammond adopted Sheitan, the pup became grateful for any type of companionship that would come her way.

One of the people Sheitan has made friends with is a little girl from the neighborhood. Keep on reading to learn more about their interesting friendship.

Sheitan tends to make friends easily. And sometimes, she does it without her mom knowing it.

Once, Bridget walked into the living room and found the senior dog sitting by the glass door. Then, she noticed a little girl who was also sitting on the floor on the other side of the glass door.

Apparently, the two were watching videos on the little girl’s smartphone. Bridget said that her dog and the girl didn’t notice that she was watching them. Instead of interacting with them, she backed away and let them enjoy their time together.

The little girl and the senior dog bonded for quite some time. It was clear to Bridget that her dog was comfortable with the little girl. The little girl, on the other hand, obviously displayed the same level of comfort and trust towards the dog.

Their playdate, however, didn’t last long. Eventually, the girl’s parents called her. They reprimanded her for being nosy, but somehow, the girl shrugged off their remark by smirking at Bridget.

Get to know Sheitan

Sheitan might have a tough past, but that didn’t keep her from becoming a loving and thoughtful dog.

Bridget shares that Sheitan is an easygoing dog who loves eating and receiving pets. And because Sheitan is friendly, she can easily warm up to other animals. She likes to cuddle with Bridget’s kittens, and she even acts as their mother.