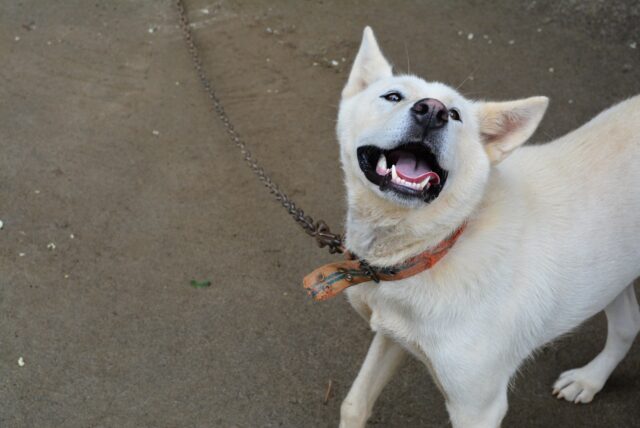 The TV network SBS TV had posted a story a while back about a dog who kept waiting for four years outside a building. She was called Baegku, and she was madly in love with another dog named Boksil. As a result, she would wait every day for Boksil to come out and join him during walks. This is the continuation of that story.

The filming crew later found out that Baegku was not a stray dog. She was unkempt and was always outside. That’s why people thought she was a stray. However, a woman showed up to get her.

It turns out that Baegku’s real name is Heemang. She is owned by a middle-aged woman who lives far away from Boksil. Despite the distance, Heemang would try to run away and go to where Boksil is every day.

Heemang is a nine-year-old dog and is five years older than Boksil. The two dogs aren’t strangers. They were a couple for a while, and they even have puppies. However, Boksil lost interest in Heemang, and he moved away.

Heemang’s owner is concerned about her health. Her owner took Heemang to the veterinarian, and there they discovered something concerning. Heemang’s joints are wearing down because of all the walking. She is too old to be traveling long distances.

As a compromise, Boksil’s owner promised to visit Heemang with Boksil every day. That way, the older dog doesn’t have to exert much effort. It was good news for Heemang and her owner.

Boksil and his owner walk outside every day. It wouldn’t be much trouble for Boksil to have a regular destination during those walks. With everyone coming to an agreement, Heemang’s owner prepared a dish for Boksil. She also had a crate designed exclusively for both dogs to rekindle their bond.