Home Bark Hope This One-Eyed Pup Endured A Lot Of Challenges And She Survived Through... 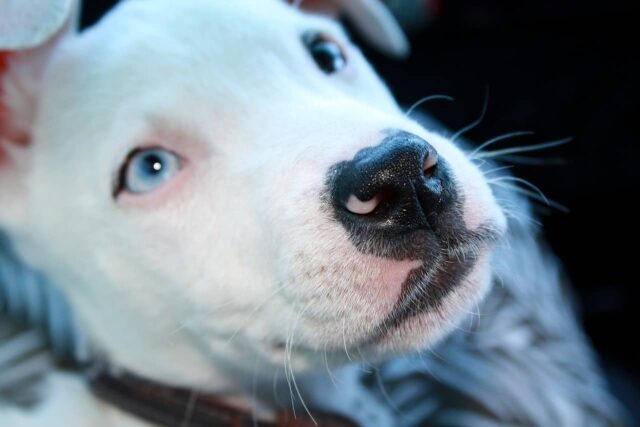 Kilyn and her husband first met Bubbles when they were volunteering in an animal shelter. The moment they saw her, they knew that she had suffered through so much trauma. She had one eye missing but they didn’t know exactly what happened to it. Her skin didn’t look good and she was also very skinny.

She was brought in by someone who apparently saw what had happened to her. But aside from that, little was known about her past. And the next thing the couple knew, they had fallen in love with the one-eyed puppy and the feeling was definitely mutual. So, they agreed to foster her and then took her home.

During her first night, the couple immediately noticed that something was wrong with her. So, the next morning, they took her to the vet where they discovered that her right jaw was shattered. After another exam, they noticed that her whole right inner ear had also been unfortunately shattered.

And that was when everything clicked that Bubbles had been shot in the head. And if that wasn’t enough, it looked like she had also been beaten with a hammer.

But even though Bubbles suffered through all that painful experience, she never became an aggressive dog. In fact, she warmed up right to Kilyn and her husband and she definitely loved being held by them.

But what really opened her up and made her happy was playing with the couple’s other dogs. She loved being around them and having a family. And she did not need to worry because she wasn’t going anywhere. The couple had been clear that they were fostering to adopt right from the start and they never wavered with that decision.

Once she got through the surgeries and recovered, they signed the papers and officially adopted her. Bubbles completely moved on from her past and decided to live her best life with her newfound family. She wakes up every day with the pure intention to live it like her best day and her attitude towards life is just so incredible.

Bubbles is really an inspiration to many to just keep going because life goes on and life will get better.