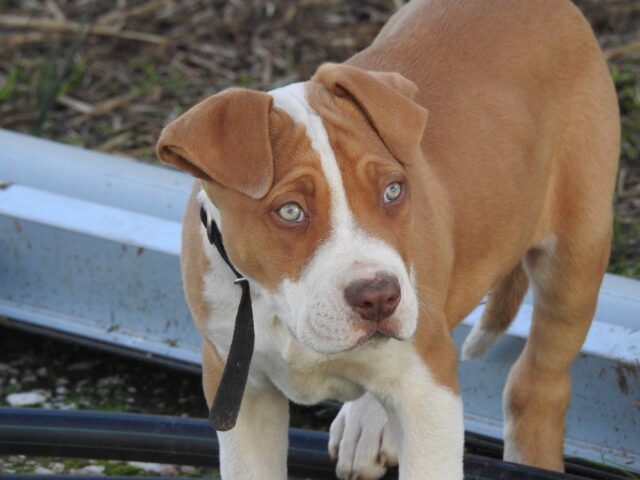 Animals who grew up without their parents can share a special bond with each other when they meet. That’s why people who foster animals like to take care of pets with similar backgrounds. The following scenario is a good example of such a wholesome dynamic.

Guinness was the smallest one in his litter. He didn’t receive much care because his mother ignored him. A lot of people assumed that Guinness wouldn’t live long.

A woman named Jess believed in Guinness. She couldn’t help but fight alongside him. She brought the small puppy home with her and gave her some bottled milk. Guinness drank the milk as fast as he could.

Guinness started revealing more of his personality as his condition got better. The happy pit bull had stayed for two years with Jess and helped her take care of foster puppies. Guinness is used to the presence of other small animals.

One day Jess found out about Guinness’s particular obsession. He loved interacting with puppies but ended up loving kittens more. The obsession was discovered when Jess first brought two kittens for foster care.

Guinness loved licking the kittens clean. He also loves watching Jess while she feeds the kittens. The lovable pit bull loves to sit on Jess’s bed and make sure that everything is going well with the kittens.

When the kittens started growing and walking, Guinness wanted to play with them. Despite being a male dog, Guinness showed motherly instincts. The kittens that Jess brought never interacted with their mother, which is an experience shared by Guinness.

Jess is sure that the kittens look up to Guinness in some way. After all, he has shown them how to drink out of a water bowl and other similar tasks. It looked like Guinness was showing them the ropes.

Eventually, the kittens were adopted and it was hard for Jess to come home without them. Fortunately, Jess never stopped fostering kittens. Guinness will always have new kittens to take care of.

Video courtesy of The Dodo Pittie Nation via YouTube.