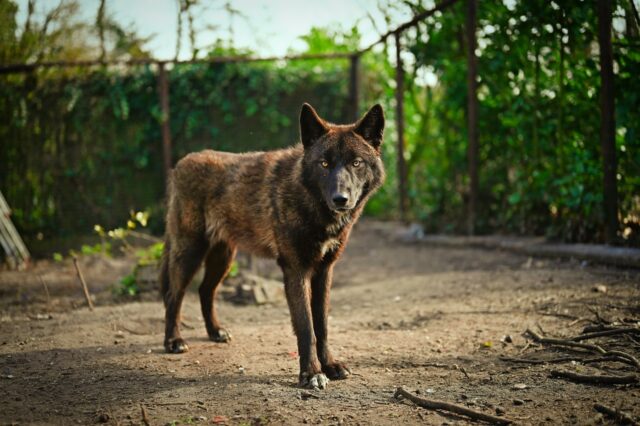 Yuki is a wolf-dog that has been abandoned at the shelter when he was only eight months old. When he came to the shelter, they had to confirm if he was a wolf-dog first to be able to provide him the special care that he would need. Results from tests came back, proving he is a wolf-dog.

When the shelter took Yuki in, he was comfortable being around a lot of people who interacts with him. As Yuki gets older, the rescuers from the animal shelter noticed that Yuki started to limit the number of people he allows to go in his enclosure.

Yuki was found to be 87.5% gray wolf, which has shown on his test results. His handler Brittany was one of the very few people that Yuki lets in his enclosure. Brittany is Yuki’s favorite human being.

Brittany has undergone training on how to handle Wolf-dogs. The first thing she learned during her training was to try and build relationships and be comfortable with wolf-dogs while being on the other side of the enclosure.

Yuki lets people know if they are welcome in his enclosure. The rescuers know that Yuki would howl if he likes someone. For people he doesn’t like, he would either growl or bark at them.

The very first time Brittany met Yuki, he wooed at her. That was when she knew that they would have a great relationship. Yuki also lets Brittany roam around his enclosure freely.

Brittany has a very close relationship with Yuki. Yuki would comfortably sit on Brittany’s lap the whole time she is in the enclosure. He definitely loves being around Brittany.