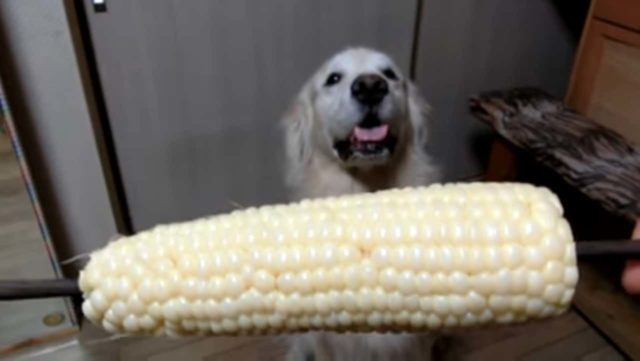 When a dog eats, they typically consume their food from a bowl. There is this dog that lives in Japan that eats corn on the cob. What is outstanding about this pooch is how he neatly devours all the kernels from the cob, earning him the nickname, “Corn Dog.”

This “corn dog” is a golden retriever. Dogs of this breed have a healthy appetite. They typically are not picky about the food that they eat, and if it tastes good, they consider it as a treat. This pooch knew how not to eat the whole thing, and only bit off the kernels that he could chew. Most doggies would chew the entire ear of corn, cob and all!

This video begins with the close up of the corn and the hungry dog, sticking its tongue out! The pooch licks its chops when the food gets offered! As the sweet cob of corn held in front of his mouth, he takes a big bite! Bite after bite, going from one side of the cob to the other, row by row, this golden retriever munched and crunched to eat those sweet kernels of corn!

As the golden retriever bit the corn, the owner had to hold the cob stick well, as the force of the bite of the pooch was pulling it! The adorable pup tugs the grains with each mouthful, systematically and neatly. This cute doggie got to eat all the kernels faster than the length of the video clip, which is just one minute and forty seconds. That’s one fast corn on the cob eater!

This ‘corn dog’ is named Coco. The video we are sharing is from its Japanese owner’s YouTube account, which is gajyumaru234. This footage of a dog eating corn has gathered over 3 million views!