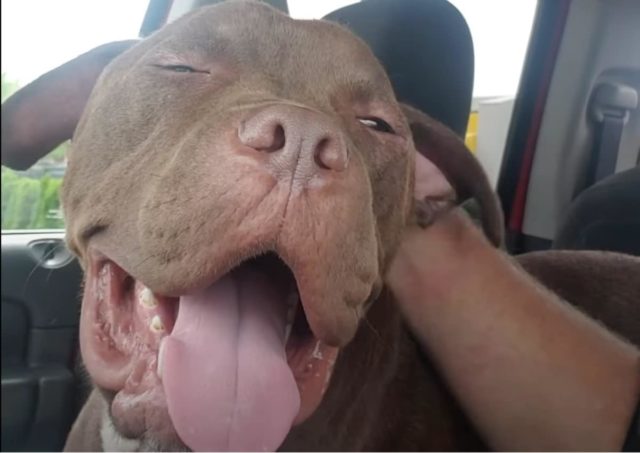 Jordyn Stevenson of St. Louis Stray Rescue helped save a Pit Bull who could not walk. Riley, the extremely emaciated Pittie, was so weak and even looked as if he was inches away from death.

Jordyn shared with The Dodo that her colleague, Donna, brought Riley into their shelter and immediately placed him on the table for examination. The scared Pittie was shaking in fear, but Jordyn and her team reassured the pooch that everything was going to be okay.

This Is The World's Most Determined Pittie

The shelter staff made sure that Riley was snuggled in with blankets and kept warm. Jordyn recalled that the Pit Bull looked so grateful because someone finally took a chance to help him get better.

Jordyn and her fellow rescuers wanted Riley to enjoy outdoors, so they decided to stuff the red wagon that they have with some blankets to make sure that it is cozy enough for the dog. Riley was finally able to experience how it feels to be walked outside on his 12th day in the shelter.

Jordyn shared that Riley had his head up during the entire time he was outside, and even looked so proud. Riley enjoyed his first-ever walk outdoors and seemed content just sitting comfortably in the wagon.

Jordyn recalled that Riley started having the will to want to get up and be able to walk around like a normal dog on his 14th day at the shelter. Riley could not run yet, but he was able to stand up and even take a couple of steps all on his own.

Jordyn shared that she burst into tears when Riley walked outside and just kept going. A gentleman named Ron visited Riley on his 42nd day at the shelter, and Jordyn said that the man was actually following Riley’s progress. Riley was officially adopted, and finally has a family that will love him forever.