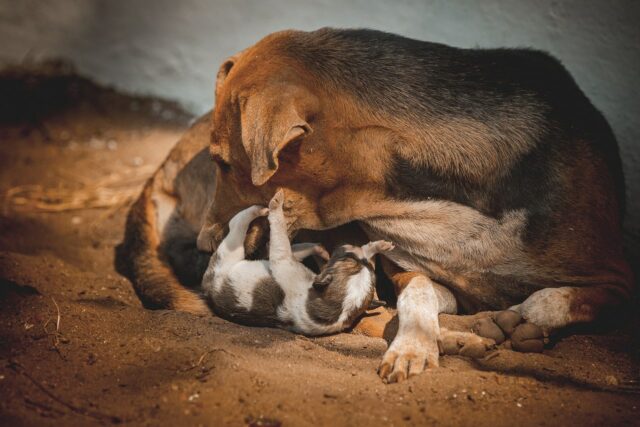 Dogs display maternal instincts even around puppies that are not related to them. That’s why it’s not uncommon to see a female dog act as a mother to puppies under foster care. Many dog owners who become foster parents to puppies take advantage of such interactions to provide a better foster care experience.

Rhino was a homeless dog who was nursing five puppies. She was rescued and placed in a good home. After her puppies were weaned, they were sent to different homes, which is what usually happens in this case.

Two days after Rhino parted with her puppies, her rescuer received an important call. The rescuer was asked to take care of seven orphaned puppies until they were old enough to be adopted. Fortunately, Rhino was there to help her rescuer with that task.

Since it wasn’t long until Rhino last nursed her puppies, she still had milk to give. It was crucial for her to nurse the new puppies to guarantee their survival. Aside from nutrition, Rhino’s presence as a mother figure helped the puppies feel loved and accepted.

After some time, the rescuers fostered a pregnant dog named Nvidia. When she gave birth to her puppies, Rhino was by her side helping. Rhino was a natural at providing maternal care to puppies no matter their relation to her.

The reason why Rhino is such a successful mother dog is because of her calm and resilient nature. She can handle and brush off stress compared to other dogs. That is also the reason why she later got adopted by a wonderful family.

Rhino’s rescuers were sad to part with her, but they knew she was going to the right place. She did her duty as a mother, and she deserves to rest in a new home. She’s done more than enough good deeds during her time in foster care.