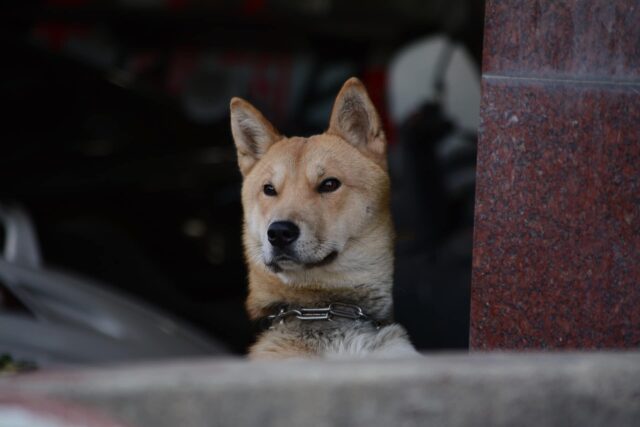 Baekgu is a typical Korean dog. She’s unkempt and sits in front of a building for hours on end. One look and people can immediately tell that she’s a stray dog.

According to nearby residents, Baekgu had been in front of the building for four years. At that point, people have assumed many things about the situation. Could she be waiting for an owner who passed away? What kind of dramatic backstory does she have?

The truth about Baekgu’s wait is a little different from what people expected. Once a certain man with his dog comes out of the building, Baegku rushes to them. She was waiting for another dog all along.

Baegku always waits for a dog named Boksil to come out. Since Boksil is a male dog while Baegku is a female dog, there’s one common assumption. Baegku has a huge crush or is in love with Boksil.

Boksil’s owner is still baffled by how long Baegku had been keeping up the routine. He goes on a walk with his dog every day, and Baegku would always follow them. Her dedication is on a different level; it’s something comparable to scenes from romance movies.

Baegku is not the only female dog interested in Boksil. During the walk, they encounter another dog that also has a crush on Boksil. Naturally, Baegku and the other female dog get into a fight.

Baegku is left injured after the fight. Still, she manages to follow Boksil back to where he lives. As usual, she stops at her spot and begins waiting again. This is the everday struggle of Baegku.

After a few moments, the people filming Baegku noticed a woman approaching. She was calling the dog by a different name. Could she be Baegku’s real owner? SBS TV will post an update to this story on their YouTube channel.