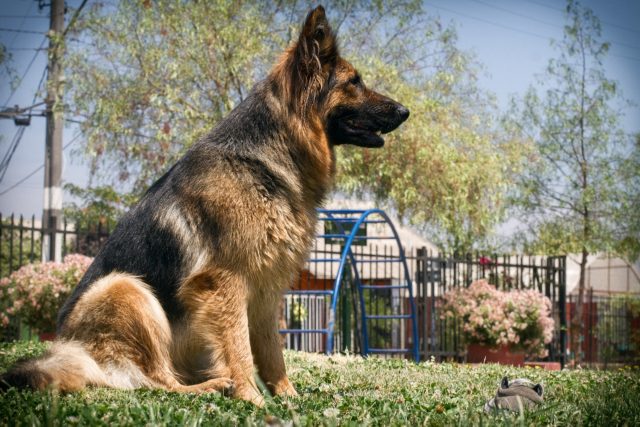 Back in 2013, Chris Cimino and his family adopted the rescue German shepherd named Gretchen. Chris said that they didn’t know Gretchen’s backstory, but it was quite evident that she had a rough past. She doesn’t easily trust people.

She came to love her family soon after moving in with them. However, Gretchen remained wary of people outside their family except for Fernando Barboza. Fernando has been working as a mailman in Texas for five years. He’s a dog lover and knows the name of all the dogs on his route.

Fernando always has a bag of treats in his truck. Whenever there’s a dog in the house he’s delivering a package to, he’d give it a treat. He said that he should also give something to the dog if he’s bringing something to their owner. After all, they’re family too.

That’s how he met Gretchen. That’s also how he won her heart. Fernando said that that, at first, Gretchen was a bit standoffish. However, he started talking, petting, and giving her treats, which made the mistrustful dog adore him.

From then on, they’ve made a tradition that lasted for years. Every day, Gretchen would stay by the front door, eagerly waiting for Fernando’s arrival. Chris said that Gretchen knew the mail truck’s sound. Whenever she hears it, she’d perk up and get ready.

Chris acknowledged how Fernando’s good nature and his love for their dog helped Gretchen let go of her painful past. Fernando considers the sweet pooch as his buddy and Chris said that Gretchen loved Fernando too.

A few days ago, Fernando saw Cimino family’s flag up. This meant that they had an outgoing mail. Upon checking, Fernando learned about the heartbreaking news. Gretchen passed away.

The package contained the treats that she wasn’t able to finish. It also had a note from the Cimino family, asking him to share the treats to the dogs on his route. They said that Gretchen always enjoyed seeing him and was happy to receive the treats he was giving her.

Fernando was choked up when he read the note. He knocked on the Cimino family’s door to say his condolences. He also promised to do Gretchen’s final wish. While he’s used to giving treats to the dogs on his route, this time the treats are no longer from him. He tells the dogs that it’s from Gretchen.

Fernando said that it’s bittersweet for him to do that. He’s glad to see the wagging tails of the dogs whenever he gives them Gretchen’s treats. But, at the same time, he’s sad whenever he thinks about her. He also added that Gretchen might not like other people, but she loved other dogs.