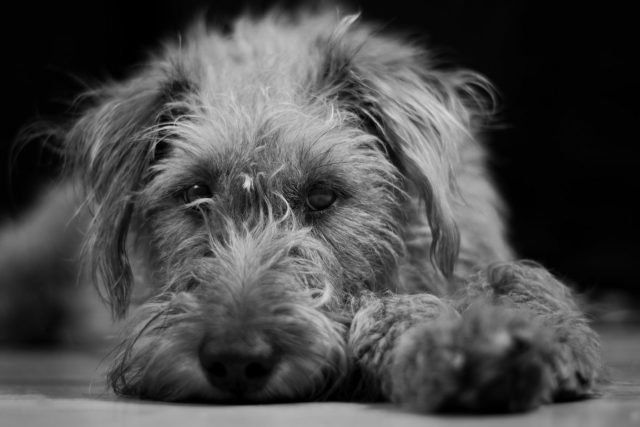 Many dogs are highly energetic. They love running around, playing outside, and exploring things that attract their interest. On the other hand, some dogs are complete couch potatoes who want nothing to do with these energy-draining activities. One example of that is Ruben, a 5-year-old terrier.

Ruben is David Harsanyi’s dog who takes nap time quite seriously. David describes Ruben as someone who loves barking at strangers. But, more than that, Ruben loves sleeping. He even made it his hobby.

A final plea for clemency before I take him in for his bath. pic.twitter.com/h9dkyi2kzv

While Ruben’s hobby might seem nothing but normal, wait till you hear where he loves to sleep. Ruben has a habit of making himself look like he died from a terrible accident. He sleeps at the bottom of the stairs, looking like he had a terrible fall. If you hadn’t known him, you might get a heart attack.

Good thing David works at home. The two of them spend a lot of time together, so his fur dad has gotten used to Ruben’s sleeping habits. Otherwise, this fur baby could give his dad quite a scare.

David said that Ruben usually prefers to sleep on his feet. However, he would often disturb Ruben’s nap time whenever he gets up and moves around. When that happens, Ruben also decides to get up and walk around.

My dog loves sleeping at the bottom of the stairs, but it always looks like he perished in a terrible accident. pic.twitter.com/9iLiEWADlH

Ruben would often camp out at the bottom of the stairs, so he could monitor his dad whenever he goes upstairs. Most of the time, he would also fall asleep there. So, when David goes back downstairs, he is met with his fur baby, looking like a harrowing spectacle.

While Ruben loves sleeping at the bottom of the stairs, he also enjoys sleeping on his big, posh, pink doggy bed from time to time. It would have been better if Ruben just sleeps there to avoid looking like a crime scene, but probably, it’s his way of giving his dad some good laugh too.